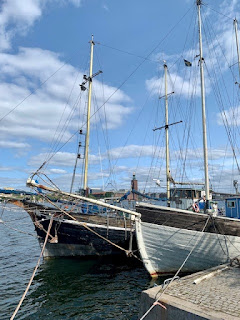 During the height of the pandemic, I kept blogging … but mostly about beautiful walks in Stockholm as that was pretty much all I could do during that time and I hoped my posts could inspire future visitors to the city. While museums, shops and restaurants have now reopened here in Stockholm, I imagine you shouldn’t stop blogging about walks. Especially since Stockholm, with so many parks, islands, and boardwalks, is the best city I know to explore and enjoy on foot.

We have had a good time here in Stockholm, so we took advantage of it the other day and took a nice and quiet walk along the north coast of the island of Sodermalm. This ride is called South Mälarstrand and is a little over 2 kilometers long, stretching from Hornstull in the west to Slussen in the east. It’s a nice walk on a summer day and gives you great views of the city. It is not as well known as the most popular rides of North Mälarstrand (just across the lake) and Strandvägen, which is probably because it is relatively new and was not completed until 1997. 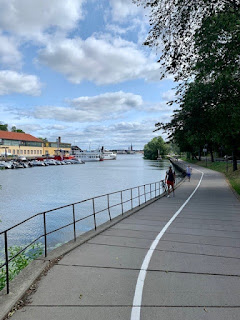 We started On Bridge connecting Södermalm with the forested island of Långholmen (click here for an article about this island), and started walking east. Along the way, there are many old boats of various sizes moored at the dock. Many of them have plaques that explain their history, which is interesting, and several have been set up as bars or hostels. One is even a school for sailors! In fact, I mentioned one of these ships in a recent article about the Norwegian Crown Princess Märtha. It also has great views of Stockholm City Hall and Riddarholm Church. across the lake.

Locks, in the far east, is currently a major construction site (read more here). You can walk the whole way, but we opted for a more scenic detour … Monteliusvägen! As you near the end of the boardwalk, you will pass a large, beautiful red brick building. This is the old brewery Munich Brewery (now a conference / event center). Right after the building, you have a street that leads uphill towards Södermalm called Torkel knutssonsgatan. It is a bit difficult to explain, but you must go up and find Bastugatan street (# 48- Map) and here you will find the western entrance to Monteliusvägen.

Monteliusvägen is a picturesque trail that winds along the heights of Södermalm. The views here are used in many postcards of Stockholm and it is an Instagram favorite. Near the ned of Monteliusvägen you will come to a cobbled alley called Blecktornsgränd… just follow this alley until Hotel Rival. Obviously our hotel guests may find it easier to do this entire hike in the opposite direction (starting at the hotel). Speaking of which, if you are staying at the hotel, talk to me for more detailed instructions or tips for other enjoyable walks. 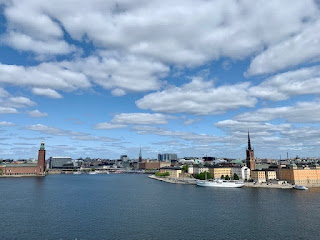 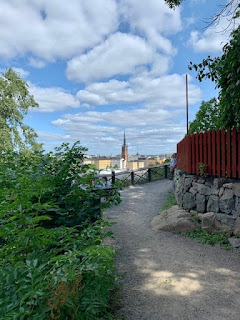 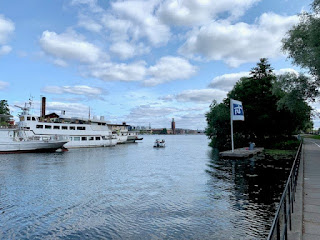