Most major cities have a large park within the city that attracts both visitors and locals … Central Park, Tiergarten, and Hyde Park are good examples. In Stockholm, we have Djurgården. Djurgården is both the name of the island and the park that occupies both the island and part of the mainland, all of which are part of a larger park system: The royal city national park. This is a green belt that covers most of the northeast area of ​​the city and is the city’s first national park in the world.

But in general, when people talk about Djurgården, they mean the island itself. And, if you visit Stockholm, chances are you will visit Djurgården, as most of the Main tourist attractions found here: Skansen, Vasa Museum, Gröna Lund, ABBA the Museum and much more. They are usually all clustered at the western end of the island. Sadly though, most visitors miss the rest of the island right behind the attractions … with acres and acres of beautiful parks, forests, and waterways. 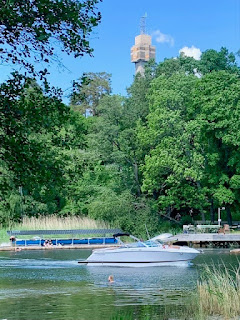 A great activity to do on a sunny day is heading out to the eastern end of the island and then walking back to town. While you can take a bus there, I prefer to take one of the commuter boats (# 80 from Nybroplan) In summer. The pier at the end of the island is called Blockhusudden and, from here, you can return to the city in a quiet place on the route you choose. When in Blockhusudden, don’t miss a wonderful art museum called Thiel Gallery (Thielska Gallery).

The return route, which I chose for my recent hike, crossed the island, through wooded trails, The ice cap insert wetlands to the Djurgård channel that separates the island from the mainland. You can then follow the canal to the city. I’d say the walk takes around 1½ to 2 hours, depending on your pace, route, and if you make a pit stop for ice cream. The hike is by no means strenuous … all flat with well marked paths.

The forest path we take is actually called The Lovers’ Path of Crown Princess Victoria and Prince Daniel (“path of love“). Nice. The wetlands (The ice cap insert) We passed are worth the trip on their own, especially for bird lovers. As we passed, we could see several herons nesting and flying over the water. Djurgården is also known for its beautiful old oak trees, and the island has historically contributed a large amount of timber to the Swedish navy (including the royal warship Vasa).

The Djurgård Canal is narrow at most points and there are four bridges connecting it to the mainland, so you can choose which side of the canal to walk on. The paths along the canal are quite popular with Stockholmians, who use them for walking, jogging, cycling, and even horseback riding. The canal itself is popular with boaters and kayakers. You can travel the canal yourself by sightseeing. Royal Canal Tour.

So be sure to take advantage of the summer weather and beautiful, accessible nature by visiting Djurgården and walking past the tourist attractions. That being said, Djurgården can be visited all year round and each season has its charm and beauty. To compare, click here for an article on Djurgården in the fall and then here for my walk around the island last winter. 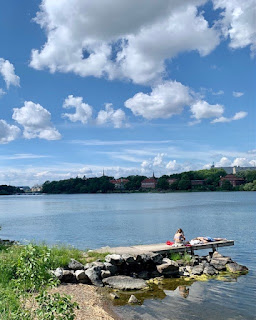